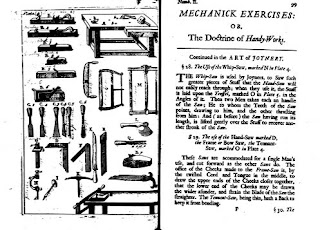 Every once in a while, i look for tenuous links between my research on Early Modern England and traditional woodworking. Naturally, i was so stoked to see Christopher Schwarz's work on Moxon, as well as his edition of the section on joinery. Other bloggers have written about Moxon, and Schwarz seems to have have ignited the woodworking world with enthusiasm for craftsmanship in early modern England. Seriously--by no means an easy or common achievement. Let me back up here. For those of you used to scouring EEBO, Moxon should be a familiar name in his capacity as a printer. Ring any bells? How about the Royal society? He was the first tradesmen to be allowed membership (in 1678).

Recently, i came across this cool book. It's quite helpful in understanding the religious environment in early modern England. I'm not up to the Gunpowder Plot yet. Elizabeth has just died, and so have many, many, English Jesuit priests who came over from their seminary in Spain to save English Catholic souls. Pretty sad. But, there is a pretty cool angle that Hogge goes into (thankfully, with photos!), and that is the hiding places for the priests. It's pretty mind-boggling that the deadly cat-and-mouse game between the pursuivants and the Jesuits, in fact the outcome of the religious power struggle in early modern England (perhaps one of the most important historical turning points) was heavily dependent on a dude called Nicholas Owen, a joiner from Oxford.

He was instrumental in creating 'priest holes' in country homes of wealthy Catholics. These were so good, they couldn't be detected by knocking on walls, etc. Father Henry Garnet (head of the Jesuit mission) employed Owen, who was so dedicated to his craft and its importance, that even servants of the households had no idea where the hiding places were! In fact, Hogge provides photographs of a priest hole that was discovered accidentally in 1879 by boys who were playing in a derelict country home. Who knows how many more priest holes the masterful and discreet Owen created which have yet to be uncovered?! Not a job i would mind having!

Sadly, Owen was captured and tortured, and like many other Jesuits, this layman gave no information before dying on the rack. In 1970, Owen was canonised as one of the 40 Martyrs of England and Wales, and his feast day is actually a week from today--16th of March. {Confusingly, it's also listed as the 25th of October (i guess it's a communal feast day for the other 39), and 2nd of March (the day he died).} Well, whenever it is, to students of early modern England and traditional woodworking, happy (bittersweet?) St. Owen's day...