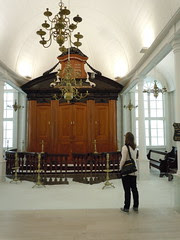 The Israel Museum just underwent a $100 million renovation. One of the highlights of the visit i took with my mum was the Tzedek VeShalom Synagogue, built in 1734 in Paramaribo, Suriname. For the woodworkers out there, the ark is made of Cyprus wood and mahogany. Below is a video about the synagogue and some really cool footage of the restoration. Just some brief history of the settlement of Jews in the area. According to our tour guide, in 1630, about 500 Jews came to Suriname to establish sugar plantations. They named them after cities in the land of Israel: Hebron, Tiberias, Jerusalem, Beersheba, to name a few of the plantations that existed in Suriname. The name of the Jewish settlement was actually the Jodensavanne, or the Jewish Savannah. To read more about the Jewish community in Suriname, click here. 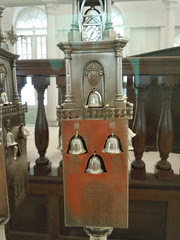 In addition to paying homage to their biblical roots, the Jews of Suriname paid tribute to their Spanish-Portugese Dutch roots. Whilst having a peek around the synagogue, we noticed that one of the finials for the Torah scrolls was an unmistakable nod to the Westerkerk in Amsterdam. You know--the one that Anne Frank mentions? Pretty cool, eh? How many synagogues today would commission, let alone tolerate, a Torah adornment in the style of a church? Pretty remarkable...