In the last post, we mentioned Tayor's attributing of a story about Abraham by the Persian poet Saadi to rabbinic sources. This we can trace to Taylor's reading of Gentius's (who, as did other scholars of the era-such as Grotius-Latinised his name. Gentius's given name was Georg Gentze) Historia Judaica, a translation of Rabbi Solomon Ibn Verga's Shevet Yehuda (or Scepter of Judah). One reader mentioned that George Alexander Kohut offers a plausible explanation for Gentius's interesting scholarly oversight in inserting the Saadi story into Historia Judaica. The article is reproduced below.

For information on Gentius which was well nigh impossible to find online, i turned to one of the definitive books on Early Modern Hebraism: Aaron L. Katchen's Christian Hebraists and Dutch Rabbis: Seventeenth Century Apologetics and the Study of Maimonides' Mishneh Torah. It's seriously one of my favourite books!

Another reader expressed curiosity about Gentius, which i found in Katchen's book. I've (rather poorly) scanned some biographical information that Katchen provides about Gentius, which can read here. Katchen also discusses the Abraham story, which is also available here.

Below is the article by Kohut, published in 1902:
Abraham's Lesson in Tolerance

Over forty years before Locke published his Letter Concerning Toleration (1689), Jeremy Taylor's A Discourse of the Liberty of Prophesying (1646) was a pioneering Protestant work on the subject of religious liberty. Interestingly, Taylor ends this treatise with a story he found in the 'Jews' books'; a story of Abraham being chastened by God for not being tolerant enough to an idolator! Below is Taylor's rendering of the story: 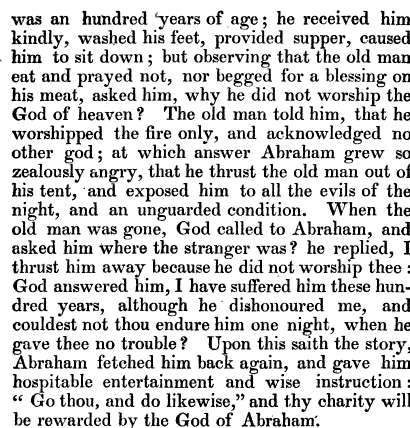 About a century later, Ben Franklin would paraphrase Taylor's story in order to argue in favour of religious toleration.
But from which of the 'Jews' books' did this story come? Surprisingly, from none; not the Talmud, Midrash, or any other mifarshim (commentators). Richard J. Newman, identifies the source of Taylor's story as Saadi's Bustan-a work which he has translated-in this post (header beginning with 'Benjamin Franklin').

But why did Taylor think that a medieval Persian poet was a 'Jewish doctor'? And what does a German Hebraist named Georg Gentze have to do with it? Stay tuned...

Jeremy Taylor, שמות רבה, and Going for the Gold

It's pretty cool to see midrash, specifically שמות רבה quoted by Jeremy Taylor. Since I like to keep my blog fairly apolitical, so i will try and resist from relating the idea of grabbing at shiny coal and getting burnt to some recent political developments:

And then, a few lines later, Taylor references another midrash, this time, i think it's from Pirke De Rabbi Eliezer:

Absalom, caught by his hair in the tree felt as if he was dangling directly over hell, and to cut himself down would be to effectively hasten his death. Therefore, he saw his painful
predicamentas buying him time, effectively. That's according to Rashi, who brings the midrash. Taylor continues:

Although doing the right thing is pretty clear, we tend to get our priorities a bit mixed up, so to speak. Perhaps Absalom was also entangled in his own delusions that he thought he wouldn't be caught. Hopefully on a personal level we won't sink that low. But as a voting population, hopefully
we'll know when to cut down our entangled, corrupt leadership. For a more politically explicit rendering of this story, see Dryden's 1681 poem 'Absalom and Achitophel,' by clicking here.
Posted by naomi at 12:13 No comments:

I know the title sounds a bit suggestive, but it's actually the name of a series on the Discovery Channel. Anyway, today is the birthday of Leonardo Da Vinci, a great example of a handy intellectual, or a tinker-thinker. The Wikipedia entry on Da Vinci has some great external links, including his notebooks.
Here's the first part of a documentary about Da Vinci:
Posted by naomi at 10:03 No comments: