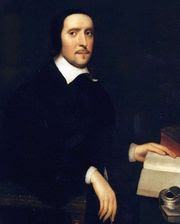 When you spend your days in research, with millions of ideas and tangents whirling around you, once in a while, out of the chaos, it is possible to view some order. In other words, there seems to be a divine nerd providence--you stumble upon certain things at the right time. This happens often. Sometimes it's refreshing to have the slightly different experience of stumbling on passages that are relevant to your personal life. Just as i was dreading the long hours of prayer prior to Rosh Hashanah, i happened to also be reviewing Jeremy Taylor's Holy Living (which you can read here), and i stumbled upon his section on prayer:

There is no greater proof in the world of our spiritual danger than the reluctance which most people always have and all people sometimes have to pray; so weary of their length, so glad when they are done, so clever to excuse and neglect their opportunity. Yet, prayer is nothing but desiring God to give us the greatest and best things we can have and that can make us happy. It is a work so easy, so honorable, and to so great a purpose that […] God has never given us greater argument of his willingness to accept it, of His goodness and our gracelessness, of His infinite condescension and our folly, then by rewarding so easy a duty with such great blessing.

I considered myself scolded. But, like any good instructor, Taylor also explains the great benefits of prayer:

Prayer is the peace of our spirit, the stillness of our thoughts, the evenness of recollection, the seat of meditation, the rest of our cares, and the calm of our tempest. Prayer is the issue of a quite mind, of untroubled thoughts. Prayer can obtain everything. It can open the windows of heaven and shut the gates of hell. It can put a holy constraint upon God and detain an angel till he leave a blessing. It can open the treasures of rain and soften the iron ribs of rocks till they melt into tears and a flowing river. Prayer can arrest the sun in the midst of its course and send the swift-winged winds upon our errand. All those strange things, secret decrees and unrevealed transactions which are of heaven, shall combine in ministry and advantages for the praying man.

And, for the more practical minded, within the section on prayer is a sub-section entitled 'Remedies Against Wandering Thoughts in Prayer.'

This past Thursday, i went back to karate after missing about a month. Naturally, the first time back is always quite difficult, but this time, i felt as if i had missed much more. During the lesson, we were told we could order 30 concrete bricks for 100 NIS. What a bargain (apparently, it really is)! But why? To smash with our bare hands, of course. Um...i thought that was for brown and black belts. Apparently, if we want to go up a level (i'm only a green), breaking bricks is going to become part of the testing. So, whilst we condition our hands and prepare, i thought that some videos about the science behind brick breaking might be reassuring.
The Stats
I'm thinking Peter Gabriel should revise his song 'Sledgehammer'
If you want to know the reason behind the physics, watch these clips. This experiment starts at about 4:15 into the clip. Apologies for the video quality--the sound seems to be slightly ahead. 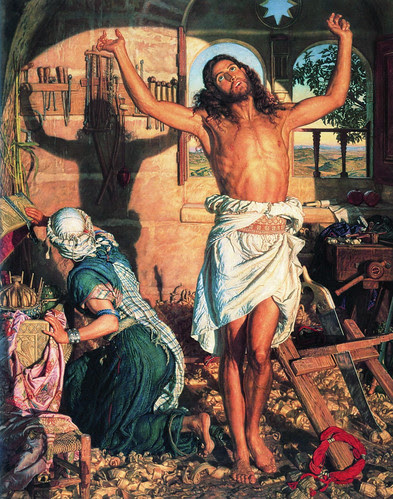 This painting is cooler than Millais's of twenty years earlier, in my opinion. It, too, caused an uproar for its realism, but unlike Millais's work, William Holman Hunt actually depicts Jesus as a carpenter who

has been hard at work all the day, and the setting sun tells Him the hour for cessation from toil has arrived, that his day's labour is over. He has just risen from the plank on which He has been working, and is portrayed as throwing up His arms to realise that pleasant sensation of repose and relaxation . . . and in perfect harmony with this physical act, so natural and grateful to every one, the Divine Labourer pours forth His soul in fervent gratitude to His Father that the welcome hour of rest has come. {WHH's pamphlet on the painting}

According to the ODNB, the painting

was begun in Jerusalem in April 1870. The figures of Christ and the Virgin were painted out of doors, the models posing on the roof of Hunt's house in the Muslim quarter. Two movable huts were constructed in an attempt to regulate the light, since the artist was determined to capture faithfully the impression of the setting afternoon sun. This was a heroic but virtually impossible task on such a large canvas and involved Hunt in continual reworking of both versions. They were completed after his return to London in July 1872, and in March 1873 were sold to Agnews for 10,000 guineas. The large canvas, which was on view at their Bond Street gallery from December 1873 to August 1874, was described that May in an American periodical as 'probably the most talked-about painting in the world' ('Holman Hunt and his "Shadow of death"', 657). {ODNB}

Scripturally, the subject is "the Shadow of Death," — the bearing of the first burden of the Curse of Adam. Morally, it is this also: the bestowing of Life in trust for future universal good, rather than for immediate personal joy. Surely there are enough of every class who have felt the burdensomness of toil, the relief at his cessation; and also enough of those who have battled against the temptation to seek this world's glory at the expense of their peace with the silent Father, and who may be encouraged to persevere. [Mr. Holman Hunt's Picture, "The Shadow of Death" (London: Thomas Agnew: [1873]), p. 2.]

Ruskin on the Painting

Among the men I know, or have known, he is the One (literal) Christian, of intellectual power. I have known many Christians-many men of capacity: only Hunt who is both, and who is sincerely endeavouring to represent to our eyes the things which the eyes were blessed which saw. (1874)

Actually, according to the ODNB,

The depiction of the Saviour and Virgin in the interior of a carpenter's workshop was influenced by Ruskin, who in the third volume of Modern Painters (1856) had called for a sacred art 'representing events historically recorded, with solemn effort at a sincere and unartificial conception' (Works, 5.85). Hunt's reading of Ernest Renan'sVie de Jesus (1863) in 1869 encouraged him to depict the Saviour as a working man, an image that he was well aware would appeal to a wide audience. Indeed, the engraving published in 1878 was Agnews' most widely circulated nineteenth-century print. But by imbuing his picture with typological symbolism Hunt wanted to convey to his audience the spiritual as well as archaeological aspects of his subject.

Painting in Palestine
The archaeological element of his painting had compelled William Holman Hunt to move to Jerusalem, where today his house still stands at 64 Havevi'im St., in the centre of Jerusalem. For photos, click here. From this vantage point,

The course of events seem so much more comprehensible-the journeys of the Saviour, in the last days of his ministration, from Bethany to Jerusalem to the Temple around the Mount of Olives ... seem so real as to appear like an event of the day. (Pre-Raphaelite Friendship, 45)

For more on Holman hunt's travels in the Middle East, click here.
There were other interesting developments during WHH's stay in Jerusalem. He came into contact with a Canadian named Henry Wentworth Monk. Monk had been sent to London at the age of seven by his parents. After witnessing the conditions the Jews endured there, and hearing a speech by Lord Asheley (7th Earl of Shaftesbury) he concluded that the only way to alleviate their plight was to return Jews to their homeland; Palestine. Again, Ruskin seems to be everyone's sugardaddy: Monk wrote a commentary on Revelations that WHH got Ruskin to fund.
The Talmud
Just as William Holman Hunt's quest for realism led him to Palestine, it also caused him to turn to the Talmud. Despite the

the vagueness of the description in the Talmud: of the form in which the scarlet was placed on the head I feel it to be very much left to myself. So I merely placed it round about the horns — to suggest the crown of thorns.

Properly speaking, the red headband in The Shadow of Death provides a type of the Crown of Thorns, while in a somewhat looser manner it recapitulates the scarlet wool born by the representative of Israel's sins, fulfilling that type in part. Of course, both types are only completed by the Crown of Thorns itself. This device recapitulates Hunt's earlier attempt at creating a prefigurative image of the Passion in The Scapegoat, for he now attempts such symbolism in a subject more accessible to his audience. {Replete with Meaning: William Holman-Hunt and Typological Symbolism, by George P. Landow, on the Victorian Web, click here}
Woodworking Tools as Symbolism

You'll probably never look at your woodworking tools the same way again. According to the pamphlet,

The shadow of the wearied Lord falling on the rack which holds the carpenter's tools, with the mandrel placed vertically in the centre, at once literally realises the form of a cross, and the hands falling thereon suggest the idea of a figure nailed thereupon, and thus the particular death Our Lord would die.

Furthermore, the tools become types of those used to torture Christ, while the reeds standing in the corner of the shop similarly prefigure the mock scepter thrust upon him during his torments. Standing in a plank which Christ has been cutting, a saw casts a shadow upon the wall that clearly provides a prefiguration of the spear that pierced his side.

Christ's girded loins also suggest the costume of the Crucifixion, while the plumb-bob dangling from the rack of tools suggests Christ's heart, because of its shape and placement within the shadow. {Landow, Victorian Web. Read the rest of it--it's awesome--click here}

Hunt's significance as one of the three original founders of the Pre-Raphaelite Brotherhood, and the only one to have remained true to its original principles, was acknowledged on 19 July 1879, when Vanity Fair published a caricature of him entitled The Pre-Raphaelite of the World. The way in which many of his major paintings focus on highly dramatic situations, fusing truth to nature with a serious moral message, struck such a chord with the Victorians that his influence during his lifetime can be compared to that of Thomas Carlyle, Ruskin, and Charles Dickens. {ODNB}
Posted by naomi at 15:47 1 comment: